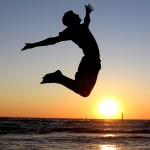 This past week, one of my clients returned from an exotic vacation and told me heâ€™d felt almost nothing during the trip. He took no pleasure in any of his adventurous activities, and when there was a guide involved, my client felt preoccupied with the impression he was making upon the other person rather than focusing on the adventure itself.

In another session this last week, one of my clients told me about several interactions in which she had wanted contact with other people, wanted to feel that they were genuinely interested in her, but when they actually did ask her a question about herself, she replied in a terse, closed-end fashion that shut down their interest.

The issues coming up in these two sessions strike me as similar. Both of my clients had a hard time entering fully into an experience that would have given them pleasure. I see it as a problem with joy and the risks it involves. Opening oneself to the possibility of joy also means exposing yourself to potential disappointment and shame.

Both of these clients struggle with shame. The first suffers from shame-based social anxiety so severe that he tries to make sure no one ever truly â€œseesâ€ him; instead, he exerts control over his entire demeanor and presents a fully regulated, scripted personality to convey the impression he wants. On an unconscious (and sometimes conscious) level, he feels defective and damaged; he will do just about anything to avoid coming into contact with the shame at his core. As a result, he seems detached and unemotional. Although he canâ€™t often admit it to himself, he feels profoundly lonely.

The second client has a much more vivid emotional life. She feels a great deal of anguish about how she appears to other people, whether they respect her or see her instead as incompetent or even worse, boring. She has close friends with whom she can be herself; but with acquaintances, she feels inhibited and on guard, constantly preoccupied with the impression she is making. As a result, she easily comes across as shy or reserved, not truly open to intimate contact.

All this reminds me of my own family, divided into two different camps I will call the optimists and the pessimists. The optimists, of which I am the foremost proponent, get excited about and anticipate future experiences; but as a result, we are sometimes deeply disappointed when things donâ€™t turn out as we had hoped. The pessimists believe that one shouldnâ€™t get too excited about the future because chances are youâ€™ll only be disappointed. Better not to get excited in the first place than to experience such pain.

The pessimists in my family sometimes strike me as joyless. Itâ€™s true that they donâ€™t experience the kind of pain that I do when Iâ€™m disappointed, but they donâ€™t enjoy their successes or satisfactions as fully as I do, either. Opening yourself to the possibility of joy means accepting that painful disappointment may be your lot instead. This is one of the themes of my first book â€“ that you canâ€™t pick and choose which emotions youâ€™ll allow yourself to feel, and when you dampen or suppress one, you tend to restrict your entire emotional range.

Both of my clients lead fairly joyless lives. They find it nearly impossible to open up to the possibility of joy because they are terrified â€“ not so much of disappointment as of experiencing shame. My female client badly wants meaningful human contact but fears meeting rejection (and shame). As a result, she hides her interest and thus thwarts the potential joy of feeling deeply connected to and known by other people.

My male client is more heavily defended. For the most part, he has completely repressed the part of him that wants joyful human contact, and as a result, he leads an existence without the possibility of joy. He seems resigned to a life without intimacy; helping this client to reveal himself to me, to fully become my client and let me care about him, has been a major challenge.

The joy-shame connection has its roots in the early mother-infant relationship and is best understood in terms of affect theory. We come into this world primed for joyful interaction with our caretakers. Enjoyment-joy is one of the nine genetically built-in affects; when it is interrupted â€“ say, when our joyful interest in mother is met with indifference or worse â€“ shame affect is the result. If babies have that early experience again and again, when attachment between infant and mother goes badly awry, core shame is the result and the complex of emotions around enjoyment-joy shuts down.

In other words, the potential experience of joy threatens the emergence of shame and must be avoided at all costs. Heavy defenses against shame thus limit the opportunity to experience joy in life.