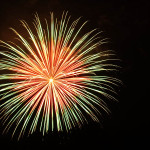 Earlier this week, my friend Sherry came over for dinner. After asking all about her trip to Las Vegas and briefly discussing our vacation, I finally got around to telling her of some recent developments in my writing career (more about this in a moment). After a few minutes, she said to me, “So you just told me all these marvelous things that are happening in your life and your demeanor hasn’t changed one bit. You’re not smiling. You don’t seem excited. What that’s about?”

One of the great things about Sherry is the way she calls you out (in a loving way). She is nothing if not frank. Anyway, I explained to her that I didn’t feel comfortable “tooting my own horn,” but that I was in fact very excited. When it comes my turn to talk about myself, I tend to keep it short and to the point … though I’m secretly hoping other people will show that they truly are interested by asking more questions. I’m usually disappointed in that regard (but that’s a different issue).

In my writer’s group on Thursday, as I was telling everyone the latest news, I noticed that I was speaking in the same flat way, not quite conveying my enthusiasm. Then I told the others about what Sherry had noticed, and my explanation about feeling uncomfortable showing my excitement. I added that I didn’t want to seem too self-impressed, as if I were gloating. Our teacher Laurel said, “But you can be excited here with us and we can be excited for you.” The others were actually effusive in their congratulations and genuinely happy for me. I then acknowledged to them what I find it very hard to say: What is happening to me now is fabulous, and even better than I ever imagined it would be.

I even feel uncomfortable writing it. But I suppose I’d better explain.

During the last two weeks, there have been a number of important developments. I wake up these days wondering what other good thing is going to happen because it seems that I am on a roll.

1. I sold the translation rights to Why Do I Do That? for mainland China.

2. I had direct inquiries about translation rights from publishers in Italy and the Czech Republic for the same book.

3. My publisher for The Narcissist You Know informed my agent that they are going to pay me extra to record an audio book — my own voice, not somebody else’s.

5. An editor from the The New York Times invited me to contribute a piece to one of their forum discussions in the “Room for Debate” section — it will be my first appearance in the Times.

6. My foreign rights agent sold rights to TNYN for Australia and New Zealand.

Reading back over what I’ve written, I feel like there ought to be exclamation points all over the place, but (in my warped view) that would be bragging. Best to be as matter-of-fact as possible when announcing good news.

Part of this has to do with a fear of being envied, I know. The only person with whom I feel I can be completely candid and enthusiastic is my friend E., whose first novel has been extremely well reviewed and nominated for a couple of important awards; she has already sold her second book. Her UK publisher is flying her to London for her first book’s debut there, where they propose to wine and dine her. She’s doing so very well herself that I have no concerns that she would envy me. I can feel how genuinely happy she is on my behalf.

But even more important, I think I’m afraid of appearing narcissistic, as if I see myself as special and superior. I’m really afraid that I will appear to be gloating, so I tone it way down. I have a hard time drawing the line between pride in authentic achievement, on the one hand, and narcissistic self-congratulation on the other. I’ve worked very hard for many years to achieve my goals, and I believe that I have earned every bit of what I’ve got. I feel proud of myself because I’ve had to overcome some personal shortcomings, grow a lot, and persevere in the face of repeated disappointments to get here. Then why do I feel so uncomfortable telling other people that I feel this way, and to give voice to my excitement?

A memory comes to mind. I would have been 10 or 11 at the time. In chorus, we had been learning “O Holy Night,” a carol I have always found beautiful and deeply moving. I was so enjoying the music that I sang it for my mother at home one day after rehearsal. With her usual ironic gaze, she listened all the way through. At the end she smirked and said, “Nice” in her blunt and cutting way. I probably didn’t sound so great (I’m a middling singer), but that isn’t the point! I wanted her to share my joy in the song and say, “That’s beautiful!” with true enthusiasm. I probably wanted her to find me beautiful, too, no matter how I sounded. When children express joy, they want their parents to join in and “amplify” the joy, as my colleague Susan S. would say. My mother instead shot me down.

(By odd coincidence, my son Paul just texted me that Tom Ford’s studio in London offered him an internment for the summer. I sent him back a text full of yippees and hurrays and lots of !!!!!!!!)

I think many people of my generation had similar experiences with their parents. Pride goeth before a fall. You’re not supposed to feel too good about yourself or something bad will happen to you. Kein Ayin Hora or Kina Hora is an expression used in Yiddish to ward off the “evil eye” after discussing one’s wealth or good fortune with other people. Immersed as I am in a book about narcissism, I also can’t help but question my own motives. Do I think I’m a “winner,” now that I’m finally having success as a writer? Do I think that I have somehow triumphed over all my shame and damage? There’s nothing wrong with keeping an eye on one’s narcissistic tendencies — we’ve all got them — but I wish I could just feel happy and leave it there.

The truth is, every once in a while my grandiosity does kick in and I’ll be indulging fantasies about rave reviews and having a bestseller. And then there’s the next book which will be nominated for an award! It probably doesn’t help that the co-agent out in Hollywood got so excited about the prospect of selling a television series based on my new book. I can really get going on that one if I let myself! (Fortunately, I spent much of my life on the edge of Hollywood and have seen too many people in the business get excited and then come crashing down.) At those moments, when I am being narcissistic, I turn my thoughts to some of the distressing events from recent months. It has been a year of extremes: the traumatic emergency in mid-summer, worries about my oldest son, and a death in the family, on the one hand, and all this recent good news on the other. Remembering the bad bits has a way of “down-regulating” my mania, and that’s a good thing.

But it doesn’t feel entirely “normal,” if you know what I mean. Someone who’d come from a healthier family would just feel happy about his success, end of story. The fact that I’ve learned to observe, understand, and manage myself — the benefit of a lengthy analysis — is no small achievement, but it’s only second best. It’s not the same thing as having had a mother whose eyes teared up at the sound of “O Holy Night” and said, “I’ve always loved that one, too!”