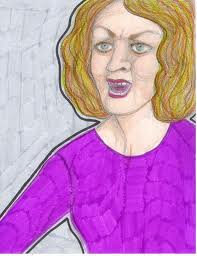 I’ve written about narcissistic mothers in two earlier posts, one about my own (mostly bad) mother, and another that differentiates healthy parental pride from narcissistic over-involvement. In particular, I’ve talked about the struggle to find the goodness in mothers who largely failed their children. I focus on this issue not only because it comes up in therapy but because it personally matters to me; I feel I’ve made peace with the memory of my father but have continued to hold a grudge, so to speak, against my mother. Lately, I’ve felt the grudge begin to ease its hold on me. To my surprise, I’ve found myself feeling more compassionate about what I imagine to have been her struggles.

I have a vivid memory from the time when I was in fourth grade. My mother was driving my best friend Chuck and me to the movies, I believe; as we traveled along Manchester Boulevard in Westchester (a suburb of Los Angeles), Chuck was reading storefront signs and billboards aloud, a way to pass the time. After he’d gone on for a couple of minutes, my mother told him, with barely concealed rage, “Yes, Chuck — we know you can read.” A simple moment that has stayed with me for years. My mother was always going off that way, or hitting you with the blunt force of her sarcasm. Recently, I had an experience that gave me a deeper, more sympathetic grasp of what made her behave that way.

For the last couple of months, I’ve been writing a novella based on the Cinderella fairy tale, about how a young woman would in reality turn out (psychologically and emotionally) if she’d grown up in a family where everyone hated and oppressed her. I’m passionate about this story and have been fairly consumed by the process of writing it. Getting up too early, working too many hours … again. The result is that I’ve been feeling tired and run down. Anyway, I was driving cross-town with a friend, who happened to be reading and commenting on billboards along the freeway. He’s in advertising, so he wasn’t simply reading to pass the time, as my friend Chuck had done. After he’d read about three, I felt the urge to snap at him: “Yes, Michael, I know you can read.” There’s a true moment of horror, to find that your angry, sarcastic mother who died many years ago is actually alive and well inside of you!

On the other hand, it made me feel sorry for her. That snappish urge of mine arose because I was too tired, my emotional resources thin. Mom must have felt at the end of her rope a lot of the time. Another point in common: my recent writing drive has some anger behind it: “real life” continues to make demands upon my time, taking precedence over the writing of “mere” fiction which doesn’t help support my family or fulfill any of my obligations to other people. I know my mother felt angry about her own life. I don’t know what unfulfilled dreams consumed her, but I felt their presence throughout my life, the ongoing unresolved resentment about what she didn’t have, would never have. I feel sorry for her. At least I’ve finished my Cinderella story and will see it published. In the end, I know I’ll get what I want.

The grudge has also eased up because I’ve begun to see it as defensive in nature. Don’t get me wrong — my mother was largely a disaster on the parenting front. But it’s easier to write her off completely than to remember the good parts, to know there must have been moments when she found me adorable, when she returned the joyful smile baby Joe gave to her … and then “dropped” me. This, I believe, is one of the most toxic effects of narcissistic mothering — for the infant to feel connection and then to be forgotten when the mother’s self-absorption takes her away. In my work with a client of long-standing, I’ve recently begun referring to this as the “intermittent mother.” It’s easier to hate a mother like that than to remember the rare oasis of love and beauty within a vast emotional desert.

I remember an old photo of my mother, taken not long after she and my father married. She’s sitting on a blanket at a picnic, smiling into the camera. It’s a black-and-white photo, but in my memory, her lipstick is a vivid red. Her hair is shaped about her head in that late 40s style that seems so artificial today. When I think of her image in that photo, she looks almost beautiful to me. For most of my adult life, I’ve thought of her as big-boned, unfit and not terribly attractive. But lately, I can almost believe there was a time when she was beauty personified, the center of my universe. I can almost hold onto to the good bits and trust that they were real if rare and fleeting.

Inspired by reader comments to my posts about narcissistic mothers and vindictive narcissists, I’ve released a new eBook on the Kindle platform. It’s a novella-length retelling of the classic Cinderella story, focusing on my usual themes of shame and narcissism, with a look at the tumultuous emotions behind self-injury.