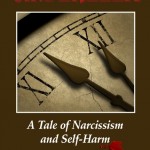 It is with great pleasure that I announce the release of my first work of fiction in over 30 years. While it lacks the imprimatur of a mainstream publisher, I’m nonetheless proud.

This re-telling of the classic fairy tale asks the following question: How would Cinderella actually have turned out if she’d grown up surrounded by people who hated and abused her? It unfolds in three chapters and runs about 75 pages in length, exploring my usual themes of shame and narcissism, along with the tumultuous emotions associated with self-injury. It’s fairly dark, and not for the faint of heart. Cinderella does not live happily ever after.

Below is a sample from the opening of the book. This excerpt should give you a feel for just how different it is from the classic version, with hints of its darkness.

Sometimes at night, curled up on her pallet beside the cooling hearth â€“ the musty smell of old straw in her nostrils, in her ears the sound of mouse claws scratching on the stone floor â€“ Cinderella felt as if she belonged amidst the ashes. She always felt dirty, though she kept her hands fearfully clean, washing them many times each day before cooking or serving, before changing those linen sheets upon Griseldaâ€™s bed or helping her sister to dress. As for her own clothes and body, she could do little but brush away the ashes then scrub her face and arms with old dishwater. Mother left her no time for proper bathing. By the time sheâ€™d finished carrying water in steaming pails from the kitchen cauldron to Griseldaâ€™s tub â€“ up and down the stairs seven, eight, nine trips â€“ new chores awaited her. Sweeping, mopping, cooking, sewing.

Cinderella did her best with these chores but her best never seemed quite good enough. Her stitches lacked refinement, her cooking was too bland; she inevitably missed dirt in the corners when she scrubbed the floors, or left streaks of grease on the dinner plates when she returned them to the cupboard. It sometimes seemed as if she could do no right and her sister no wrong. No matter how badly Griselda played the piano â€“ Cinderella wincing below stairs at the wrong notes, the plodding tempo â€“ Mother called it â€œdelightful.â€ However indolent or pettish, Griselda never heard an unkind word.

Reading Motherâ€™s face, listening to her differing tones of voice when she addressed them, it was obvious she felt blessed with one perfect child and burdened by the other.

Sometimes at night when Cinderella thought back on her life, a surge of bitterness made the kitchen shadows go deeper; she heard the skittering mice and wanted to smash them with the frying pan. Their hairy skins would split open, spilling blood and guts onto the stone floor. After another long day void of kindness, with the warmth of fading embers at her back, she would imagine a different mother, one who might love her in spite of her ugliness. She felt ashamed of having such a dream; she would never have told a soul about this imaginary mother, even if someone had cared enough to take an interest in her dreams, her thoughts, what passed unnoticed within her.

The lovely image would flood her thoughts with light. My fairy godmother â€“ thatâ€™s what Cinderella called her. Dressed all in white â€“ a pearlescent white aglow with kindness â€“ she would smile from the corner where Cinderella had conjured her. Fairy Godmother never spoke, but the way she beamed â€“ the way she fixed her smiling eyes on Cinderellaâ€™s face and never looked away â€“ seemed to tell her, You are beautiful, too. As beautiful to me as I am to you.

Occasionally, on mornings after Fairy Godmother had come and lingered long into the night, Cinderella could almost believe it to be true. Catching a glimpse of herself in the looking glass upon Griseldaâ€™s dressing table, sheâ€™d think, â€œPerhaps I really am beautiful!â€ She compared the lines of her own figure with her sisterâ€™s physique, seen and felt each day upon dressing, and briefly believed her own form lovelier, more pleasing in shape.

If her father hadnâ€™t died when she was so young, life might have turned out differently. She had few memories of Father, and not one of his face. She did recall his hands, their massive size, the feel of them. She remembered sitting on his lap and the look on Motherâ€™s face when she saw them together.

â€œLeave the girl alone.â€ Thatâ€™s what she remembered Mother saying.